In recent weeks I've gotten some mini autos from a couple of purchases off of Ebay from a couple of card Bloggers. I found out about the sales on their blogs then I bid and thankfully won them. One of them took a few bids to win but fortunately I had the highest bid in the end. All of them are on card and signed with a blue sharpie.

OK first up is this 2009 Topps 206 mini auto which I got from Chris at Stale-Gum it was $5.00 plus $2.00 shipping. Luke Montz was drafted by the Expos in 2003 he made his Major League debut in September call-ups with the Nationals in 2008. He has since signed with the Marlins. Haven't heard much from him. 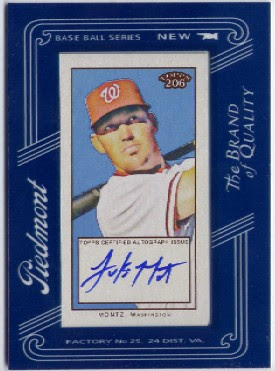 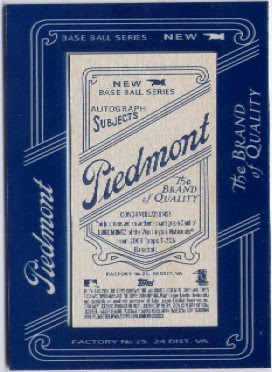 These other two are from 2001 Allen & Ginters and are current Nationals. Both I got for aprox. $12.00 each w/ $4.00 for combined shipping or there about. I got them from another Chris (didn't think about that till just now) at Nachos Grande.

First we've got power hitter Michael "The Beast" Morse. Who is one of the best things for the Nats since Adam Dunn. I think Micheal is a bit better for the team than Adam was. 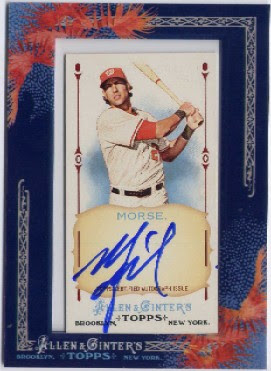 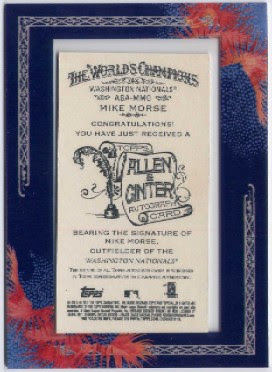 Rounding out our trio of autos this post is one of the more consistent and winning starting pitchers for the Nats this season Gio Gonzalez. Since this is last year's card he is wearing the uniform of last year's team the Oakland Athletics. 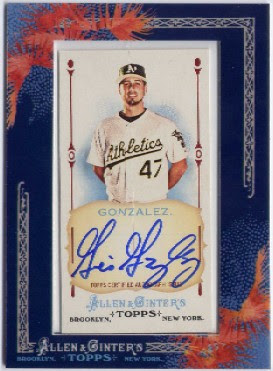 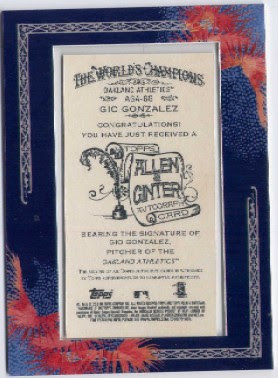 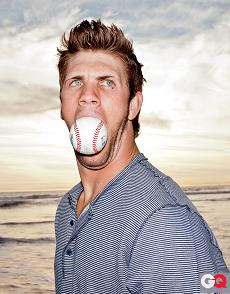 First off let me say that Rookie Phenom Sensation Bryce Harper is super awesome for the Nationals. Ever since being the first draft choice expectations for him have been high, and so far he has lived up to them and excelled beyond them. At the beginning of the season when fans were discussing what to do about him, I was in the camp of "hold off calling him up til September" he won't be ready. I had a small amendment of if the DL was full and required early call-ups. I was WRONG Totally Wrong.  Bryce was called up early in late April when Ryan Zimmerman was put on the DL for a shoulder injury. Fortunately the injury wasn't too severe (unlike Jason Werth's broken wrist) Ryan bounced back. 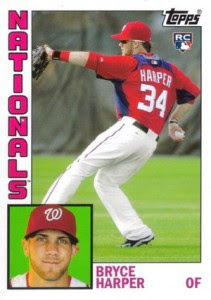 Since his call up from his short "fast tracked" time in the Minor Leagues, Bryce has been unbelievable. Not only is he a hitting sensation, he is a super fielder. He just what the Nats needed in center field. heck the Nats needed a Center-fielder. I don't want to knock the guys who have been in center-field for the Nats before Bryce, but most of them were not the best match for that position. Another Rookie sensation has been Tyler Moore who was called up in early May a week after Bryce was called up. Tyler doesn't play everyday, but when he does 'Bang Zoom'.

Even though he was called up early Bryce was not up early enough to make the official ballot for the All-Star Game. He had to be a write-in by the fans. Apparently enough fans thought him worthy enough he is in the competition for the last roster spot. 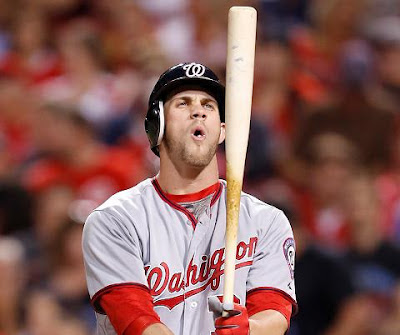 Bryce has certainly shown he is good enough to be an All-Star so it is not a question of his ability. It might be a question of "Should he be in the All-Star Game this season"? As a Nats fan I say that is a "Clown Question". Is it too soon? My biggest fear I guess is what if he doesn't make it (The All-Star Game) and then his career crashes into a downward spiral?  I don't think that will happen but it could.Is this his one and only chance? I don't think so. If he continues to excel in all areas of the game and avoids long-term serious injuries he could make many All-Star Game appearances during his career.

MLB All-Star Rosters 2012: Why Bryce Harper should Be Voted in by Fans
Mike Trout, Bryce Harper Spur Debate
Bryce Harper is not getting many fastballs or strikes to hit
5 Holes in Bryce Harper's Game Heading into the Second Half
Is Baseball Ready For Bryce? (GQ April 2012 Interview contains some foul language.)

Ryan Zimmerman
Posted by CaptKirk42 at 5:00 PM No comments: