Back on my Birthday of this year (04 April) I received 3 card packages/PWEs each with one card. I had forgotten I had some "Birthday Cards" this year, since April was one of the months I had gotten really backed up on for my mail day mentioning in my usual places on the forums. Today on my regular CaptKirk42 Card Blog I will be posting about one of the other cards from one of the other packages I got that day. A Niche Name PC Card. Here I will be mentioning the lone Curly W Card that came as an unintentional Birthday Present. The card came from a contest from TCC member dlackey (Dennis) it was a "Guess the Number" contest. The number was from 1-100 but had nothing to do with the card itself, it was just a random number. The card is a very PC card both in player and team. 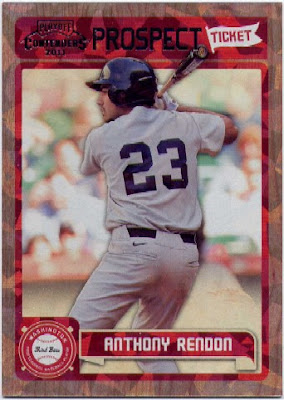 This lovely 2011 Panini Playoff Contenders: Prospect Ticket: RT-10 Anthony Rendon Washington Red crackly ice? Or Red refractor, regular refractor? Crackly Refractor? After looking at the dang checklists I think it is called "Crystal". So it is the "Prospect Ticket Crystal Collection" I guess. Serial number is 223/299 sort of a "jersey number" card for him since 23 is the jersey number he is wearing from his college days at Rice University. 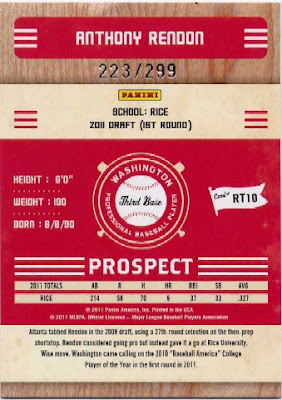