I don't recall when this retro "throwback threads" trend of MLB teams wearing retro versions of vintage uniforms from the team's past began, but ever since the Montreal Expos moved to become my beloved Washington Nationals they haven't worn any Expos throwback uniforms... Until now. On Saturday 06 July 2019 The Washington Nationals are going to be wearing Montreal Expos Throwback Uniforms vs the Kansas City Royals who will also be wearing retro throwback uniforms. The Nats will specifically be wearing The Expos 1969 powder blue road unis. Huh? Road Jerseys at home? According to the Washington Post article it is because the road uniforms are more striking than the home whites. I am a little sad we won't see Bryce Harper in an Expos Uniform even though there are mockups of him in one on the internet.

So a card that was made almost 10 years ago showing Face of The Franchise Ryan Zimmerman in an Expos Uniform will turn from fantasy to reality. I just hope Ryan doesn't get back on the Injured List between now and then. The card is a 2010 Topps Chrome National Chicle card. Why they didn't have a regular version of this card I'll never know. I am bummed it is only in the Chrome version as I have a strong aversion to Chrome cards. Not as bad as my anti-relic cards stand but sometimes pretty darn close. 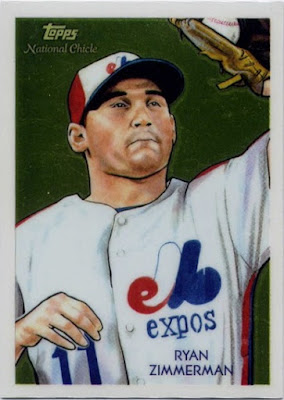 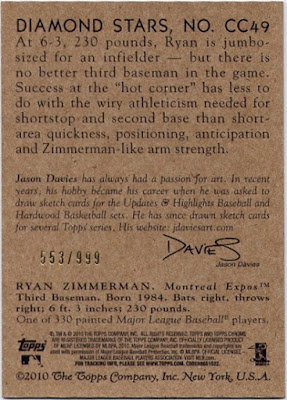 So it took the 50th Anniversary of the Franchise for them to finally wear RexTros Uniforms. I plan on at least watching Saturday's game. At one point I thought about going to the park and getting a ticket. I'm not sure if the game is sold out or not. If I find the energy and a VHS tape I might record the thing. Not sure if I'll go that far or not.