Hey Nook Its An Allen And Ginter Autograph 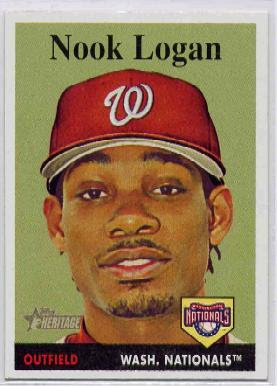 No that 2007 Topps Heritage card at the top is not the card I'm talking about in this post. I thought about making this one of my Senator's Singles posts but I didn't want this logo -

- sitting at the top of the post. Besides the card I'm showing this post is technically not a Senators card. OK yes I believe there has been a time or two that I have used that logo for an Expos card or two which technically was Never a Senators card and for many of those guys never a Curly W or DC card. I think from now on I will limit this "Senators Singles" logo to only those cards that show the guys that played DC ball from before 1972.

The card I am spotlighting this post is from 2007 Topps Allen & Ginter's Baseball set. It is one of the certified autograph cards. The framed mini cards with an on card signature. I wish these types of cards were serial numbered, but autograph cards have gotten so mainstream now they often don't warrant a serial number. Yet a parallel something stamped with blue foil lettering is?

The player featured is Nook Logan who played outfield for The Nats in 2006-07. At the time I thought he was a super guy and a much needed slugger for the team. Well he was mostly just a spectacular outfielder and a speedster on the bases. He was with the Nats when they were mostly just trading around for speedsters that made occasional spectacular plays to impress the scouts, when they really needed power bats. His bat upon reflection, wasn't so hot as I thought it was. Do bats reflect? Aluminum ones for kids and the minor leagues Yes, Louisville Sluggers and Official MLB bats NO. I forgot that he injured his foot against an outfield wall on opening day 2007, spent over a month out on the DL and never really got his hitting back up. He was slumping near seasons end. I had forgotten that he had been in the Mitchell Report on players who had used performance enhancing substances. He had used HGH to recover from injuries he had in the minor leagues when was with in the Detroit Tigers system (2004-06). Enough of the sad contributions to ending a promising career you want to see a ding-dang card. 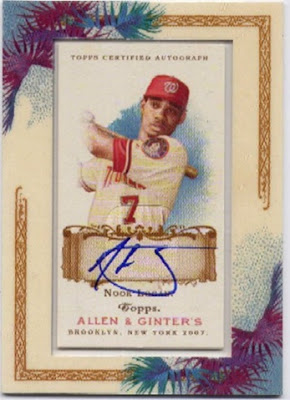 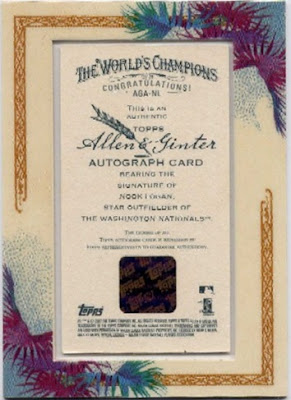 The main purpose for making this a one card post was simply to fill my monthly posting quota minimum of one post.