Its Fun Being At Number One! 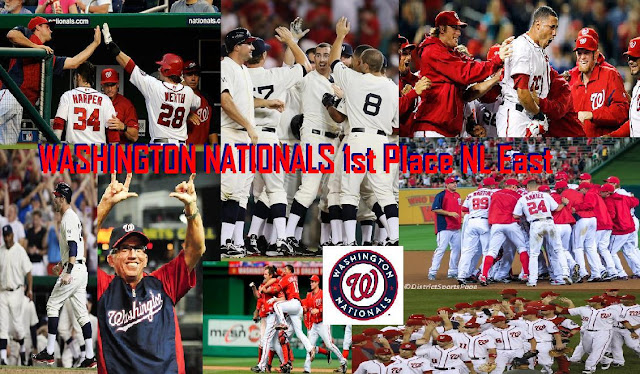 To paraphrase Mel Brooks' movie "History of the World: Part I" - "It's Good to be number one!"

Something that has been absent from baseball's return to the Nation's Capital has been a Winning Season. Being number one in the division is something that hasn't happened for the Nationals except in the first half of the inaugural 2005 season, and maybe for one or two games at the beginning of some of the other seasons.

The 2012 MLB Season has been a very good one for the Washington Nationals. They have been first in the NL East for most of it. Since sometime in early August they have somehow managed to top most of the many internet "Power Ranking" lists, even when in a losing streak. On some of the lists they are still at number one but on a couple of them they have slipped down to number two or lower. The end of the season will tell all though. Many teams have enjoyed being on top all season long only to take a nosedive at the end of the season.

The current Montreal Expos franchise as the Washington Nationals has not had a winning season. The closest they have gotten was in the inaugural 2005 season when they went .500 with 81 wins 81 loses and last season 2011 when they had 80 wins and 81 loses with one postponed game that was never made up. Had that game been played and they won, which at that time of the season they were hot enough to win, they would have matched the 2005 season. The last winning season for the Franchise was 2003 (83 wins 79 loses .512 avg). As for Washington baseball history the Senators were in three World Series 1924, 1925, and 1933 but only won it in the 1924 Series beating the Then NEW YORK Giants, they would lose to those very same Giants in the '33 series and the Pittsburgh Pirates in '25. In all the rich history of DC Baseball there has been more losing than winning. You have to go back to 1969 for the Senators last winning season of 86 wins 76 loses.

From a Washington Post article earlier this year: "Even losing baseball was better than no baseball. This year marks the 79th year of major league baseball in Washington. In that time, area fans have been treated to just 18 seasons of above-.500 ball but only once in the past half-century"

So you can see that a winning baseball team in DC is a VERY BIG DEAL to the longtime area fans who went many years without ANY baseball. Forgive us if we are not very humble this season and remind you of Philadelphia Phillies Fans. Those fans are frustrated this year and should be humble because they are used to a winning team that is currently losing. They (The Phillies) have a slight chance of having another winning season so I guess that humility of theirs won't be around very long if they have it at all. The Nats on the other hand are almost guaranteed to have a winning season with only needing to win 4 of the next 33 games. So even if the Nats fail to make the playoffs, which is another subject completely, fans like me will be very very happy and proud of our team this season.

UPDATE: D'oh! I forgot to mention the biggest reason for this is that the Nats pitching this season has been phenomenal. The individual starters might not be the best five pitchers in all the league but the whole combination apparently is getting the job done. All season long the team has had the lowest runs allowed against them in the league, even with a few games getting away from them and being blown out.

Images appearing in the photo collage are by Getty Images, AP, or Reuters except for image of Manager Davey Johnson by USPresswire, and the team photo marked DistrictSportsPage.
Posted by CaptKirk42 at 12:59 PM No comments: