I recently got a small 9 card lot of cards from Sportlots that had some vintage including a 1965 card for my Strive for '65 unobtainable goal and this Expos Prospect card: 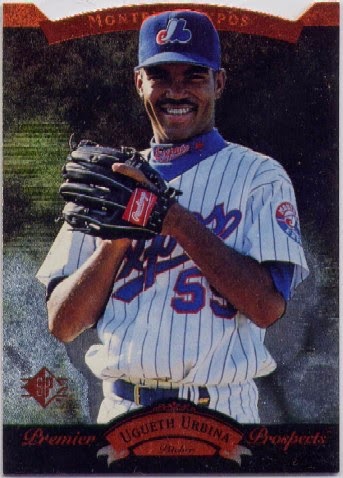 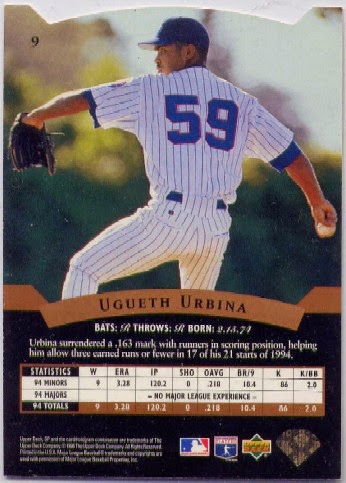 I thought it was an insert die-cut but apparently the first 20some cards in this set were the "Premier Prospects" and all of them were die-cut. The strange thing is on The Trading Card Data Base for this set this card is listed as a "foil" and a different silver foil variation is shown as the scan of the "base" card. Some of the "sub-sets" for this set over there look a bit sloppy so I don't think in this case it is a good source. TCDB is usually a good place for info but like many community databases things can get mixed up from time to time.

I don't know if it is a regular base card or maybe it is the gold or maybe bronze variant? Oh well whatever. Anyway Mr. Urbina began his Major League career with the Expos, making his debut in May of 1995. His final game would be in September of 2005 with the Phillies. Other teams he played on were: Red Sox, Rangers, Marlins and Tigers.
Posted by CaptKirk42 at 12:00 PM No comments:

This is a story about an original card and its reprint, or its reprint and then the original. I suppose I should start with the reprint which was the version I first got from Ebay or maybe Sportlots a few years back. I'm not sure exactly how much I paid for it, as I often get it confused with another reprint I had purchased around the same time (Actually that other "reprint" I am afraid is actually a counterfeit that was artificially "aged" to appear to be an original. I have blogged about on my regular blog "Love/Hate Reprints")

Anyway I'm not sure exactly when I got it or how much I paid. I seem to think I got it for under $10, maybe a little more with shipping. Like the other "reprint" I might have gotten it from Sportlots maybe even from the same seller. I don't recall it was that long ago, and I don't think I blogged about it at TCC (where I have kept track of my maildays for a long time now and more recently duplicating it at TCZ) 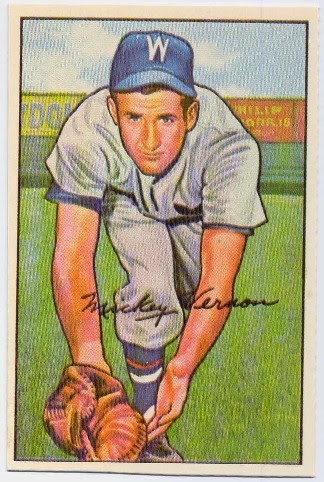 Reprint of 1952 Bowman 87 Mickey Vernon Senators
(Front and Back) 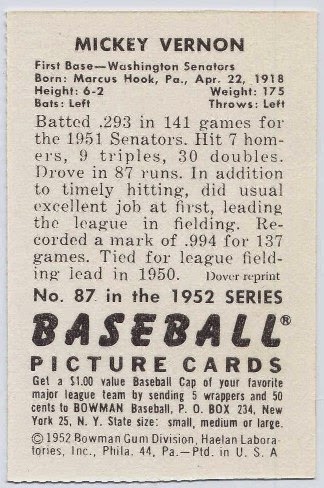 The two pictures above are of my reprint you can tell it is a reprint because the cardboard stock used is much thinner than the stock used for the actual '52 cards and the fact that it is bleached bone white rather than unbleached cardboard gray. Notice also the perforation marks on the bottom and right-hand side indicating that it came from some booklet or sheet.

Yes this card came from a book of reprints. It is from a 1982 Dover Books book of 82 "Collector's Cards" reprints by Bert Randolph Sugar titled "American League Baseball Card Classics" there was a sister book for the National League, and I think an "All-Stars" book as well. The individual card I got was from the AL book. I recall seeing these books back in the day at bookstores like Waldenbooks. 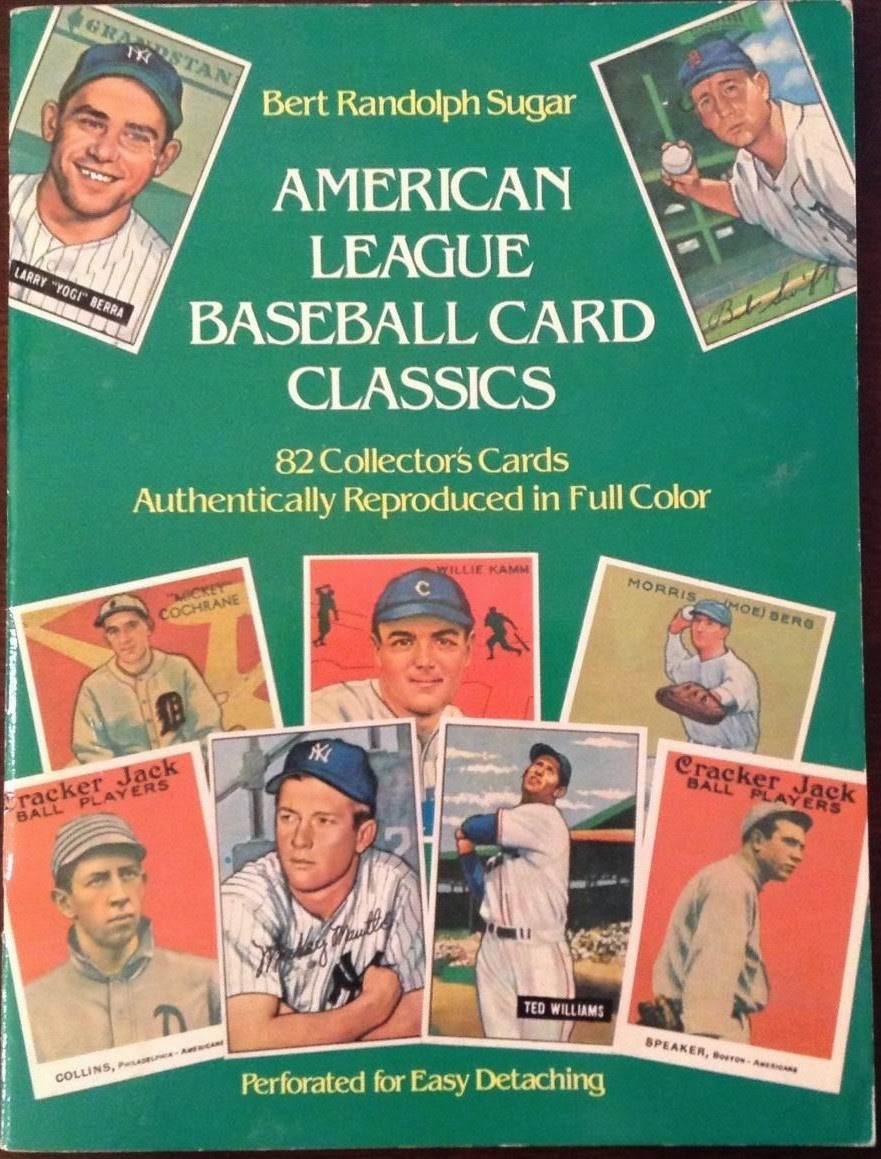 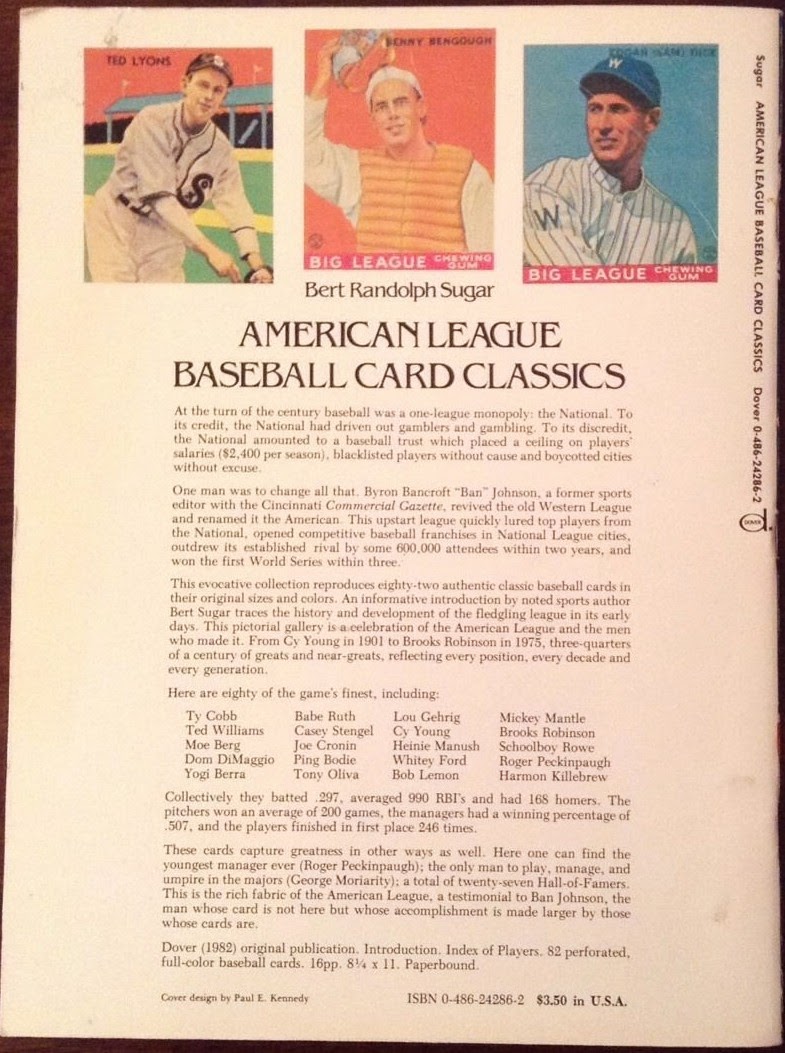 Here is what the page the Mickey Vernon card came from looks like: Notice it is the upper corner card. 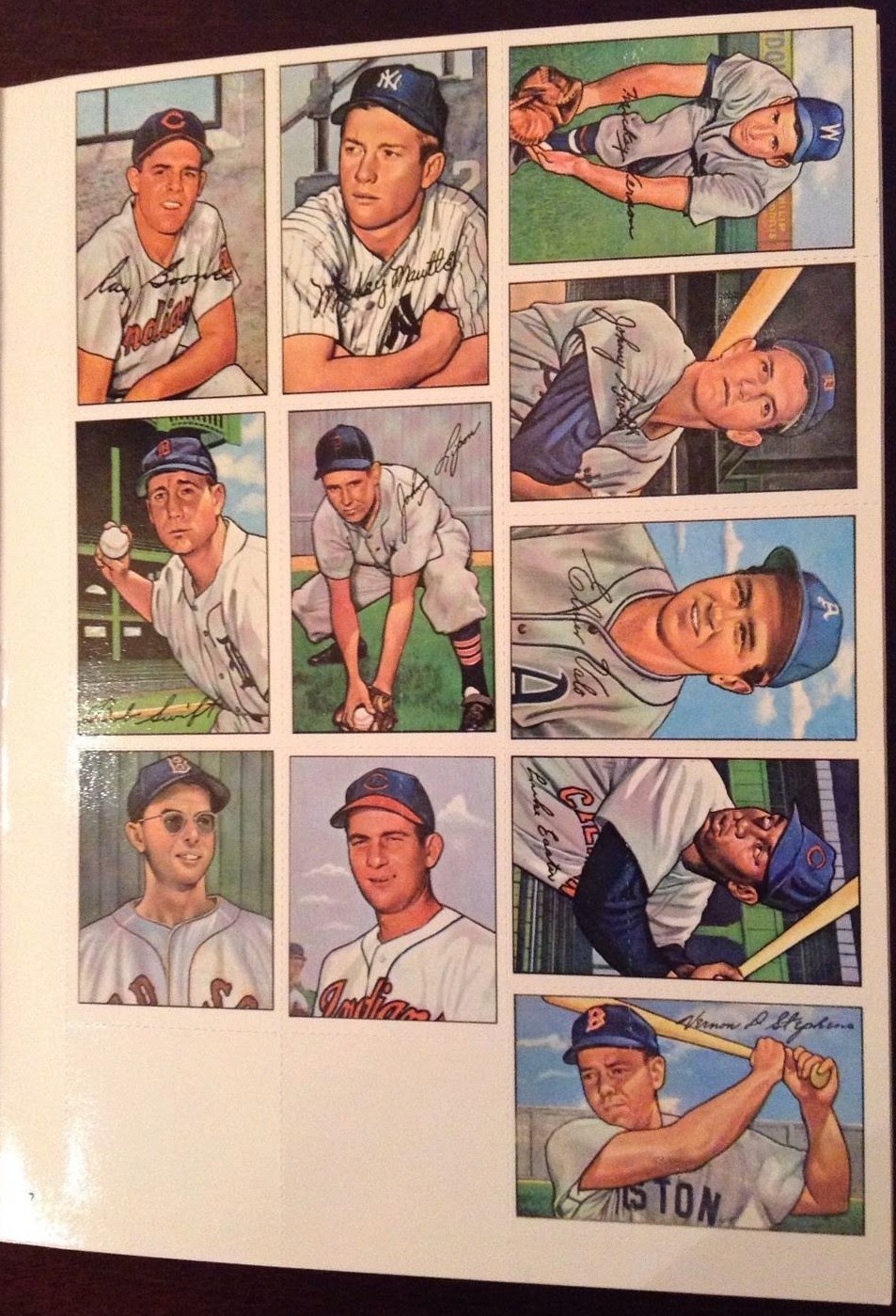 When I first got the card I wasn't sure exactly where it came from, I had to do some research. I did that research a few years back, and fortunately had put a little piece of paper in the penny sleeve I have kept this card in giving me the tip that it was a Dover Reprint. I originally had thought it was 1983, but upon finding some recent auctions for the complete book it appears to be from 1982.

Images of the "American League Baseball Card Classics" book (and the page with the Mickey Vernon card) are from an Ebay Auction that is/was going for $10 I forget what the shipping is. I don't actually have this book yet. I'm toying with the idea of getting it, and the NL sister book.

A few years later I finally got around to buying the Original of the card to satisfy my desire to have the Original and not just the dang reprint. In a bit of ironic fate I am fairly certain that for this original I paid about half or even less than half of what I paid for the reprint. I figures and is typical in today's world of card collecting. Of course after I got the original I had forgotten where I had the reprint. That is part of my delay in actually posting about this card and the two versions I have of it besides just being dang lazy and a PFC (Procrastinator First Class). As it turns out I had it in a box of some of my first couple hundred Washington Nationals cards I had gotten in 2005 - 2007 much to my relief as there were some other cards in that box I was wondering where they had gone to. 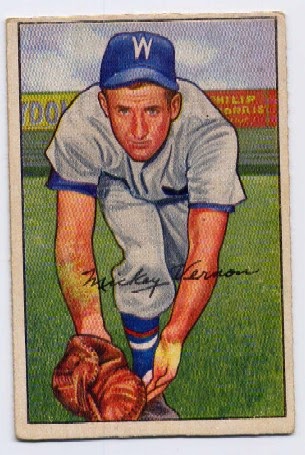 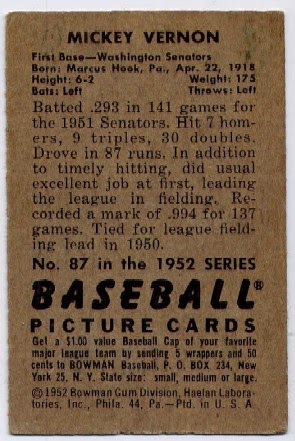 Ah the joy of owning the original of a 62 year old piece of cardboard instead of just a 32 year old copy. Notice the back of the Original is the darker aged gray plain cardboard and on the front of my original Mickey's left hand and his right forearm up to around his right elbow shows a lot of ware. It is hard to tell from the scans, but the original artwork has better detail and quality than the reprint.
Posted by CaptKirk42 at 12:00 PM No comments: