Today Monday 03 April, 2017 The Nationals take the field at home vs. The Florida  Miami Marlins. Stephen Strasburg will be the starting pitcher.

Here is the Nationals 2017 Roster:

Oh yeah show a Curly W card. That is what you want me to do instead of yakking about this season's roster. OK here is a First Pitch card from this year's Topps Flagship set. I'm not sure how many Nats First Pitch cards there are. I haven't checked the lists for the First Pitch insert sets, but I do need to get them. I think I have a First Pitch from last year somewhere, not a Nat forget what or who it is. 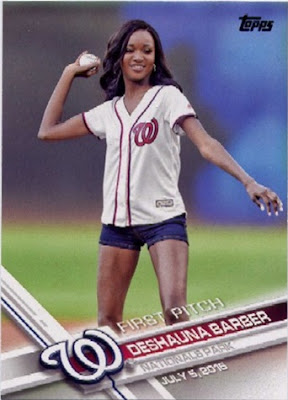 It wasn't Opening Day, but it was a special day 05 July, 2016 Nats Park. I think it was one of the Armed Services Recognition days. The ball hurler is Miss USA 2016 Deshauna Barber she finished top 9 in Miss Universe and is now a Captain in the US Army Reserve at the printing time of this card she was a Lieutenant. Her Wikipedia page shows her throwing out a first pitch in a Yankees jersey for a Yankees game, but she is more a DC girl representing DC in the Miss USA pageant. Born in Columbus, Georgia moved around as an Army brat. She has a degree from Virginia State University and a Masters from University of Maryland. 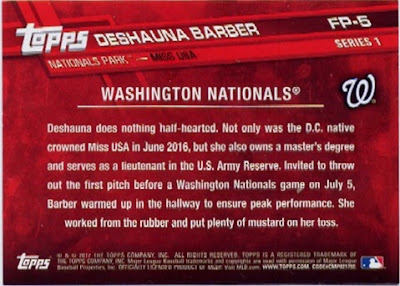 The Nationals lost that game 5-2 to the Milwaukee Brewers. Gio Gonzalez was the starting pitcher. The card I got for lets see ...99¢ + $3.50 shipping from Ebay received it Wednesday 08 March 2017. Mailday blogging sometimes comes in handy. Hehehe.
Posted by CaptKirk42 at 12:00 PM 1 comment: