Eek it is the end of the month. Lets see, Spring Training 2017 has started and right now with 3 games under their belt the Nats are 1-2 .333 as are the Braves and Marlins, the Mets and Phillies are both at 2-2 .500 so nobody in the division is doing that poorly or that great with the Spring Training only about 4 days old.

OK so Nats Opening Day 2017 this year is 03 April home vs. The Marlins. If I had planed things out I should have shown a Josh Willingham, Nick Johnson or Ivan Rodriguez card. But I didn't so I won't I will show a couple of Opening Day Cards I scanned a while back but haven't posted yet ...til now.

Opening Day 2008 (Oh Wow I didn't even think about this) was on 30 March vs. The Atlanta Braves and was the first regular season game at Nationals Park in SE DC.The Nats won 3-2 with a Walk-Off homer by Ryan Zimmerman. The Opening Day Roster was:

The Nats came in last place in the NL East that year, their usual spot for several frustrating years, with a 59-102  .366 record. Fortunately the Nationals have been doing much better in recent years.

OK so the two cards I'm a-gonna-show are of two players who have been long gone from the Nats. For one of the two players 2008 would mark his last MLB appearance and for the other 2008 was spent in the minors having made his Major League Debut in Sept of 2007. 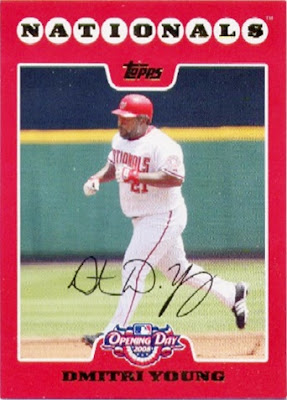 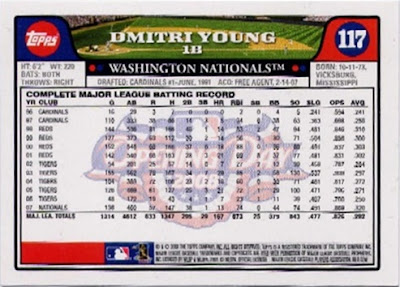 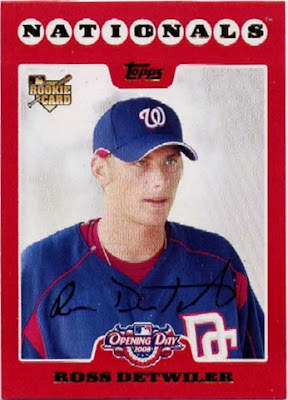 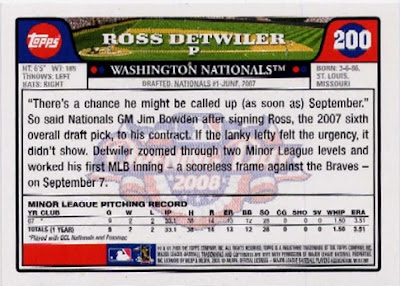