OK so here is the Bob card I was going to post about last month when I was looking to see if I had scanned the card in preparation to make a post about it. As with many Senators that played with the club way before I was born I don't know much in the career specifics of this player.

The player for the card of this post is Bob Malkmus who began his career with the Braves in 1957 they were still in Milwaukee then. This boy is All American being born on the 4th of July in 1931 in New Jersey. The autumn of '57 he was sent to the minors by the Braves and picked up by Washington for the Rule 5 Draft. Then at the end of the '59 season he was once again put in the Rule 5 Draft and picked up by The Phillies. His playing career ended in 1962 with Philly. He was a scout for a few clubs and also managed a few farm teams including the Expos. His career batting average is .215 with 8 Homers and 46 RBIs. 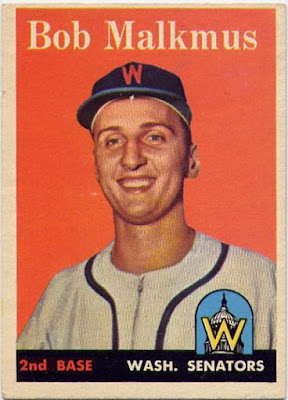 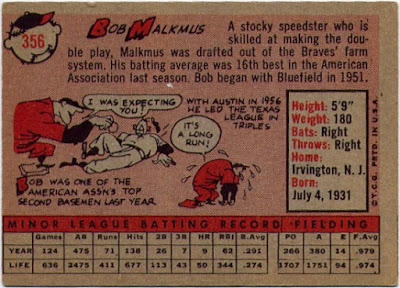 Interestingly his Minor League lifetime stats on the back of the card look a bit better than his overall Major League stats.
Posted by CaptKirk42 at 12:00 PM No comments: