Wow the Awards for Nats this year (2017) were sort of slim pickins for what was won. The winners of a couple of this years awards are much like from last year (2016). Hmm almost exactly like last year.

NL Cy Young Award: Max Scherzer 2nd Year in a row for winning this one. His 3rd over all. His first one he won when he was with the Detroit Tigers. 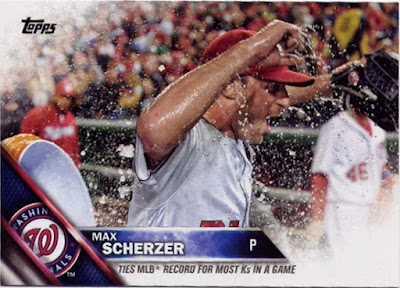 NL Silver Slugger 2nd Base: Daniel Murphy this is also his second year in a row for this award. 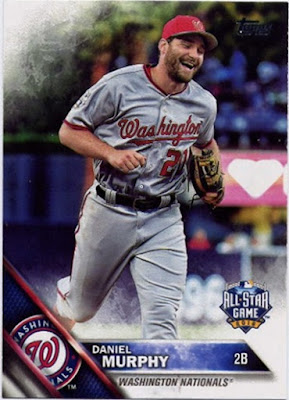 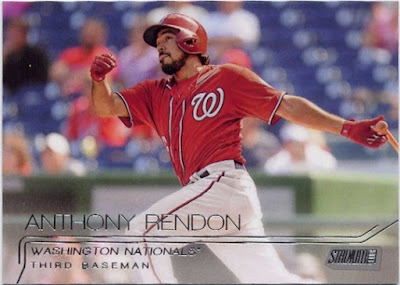 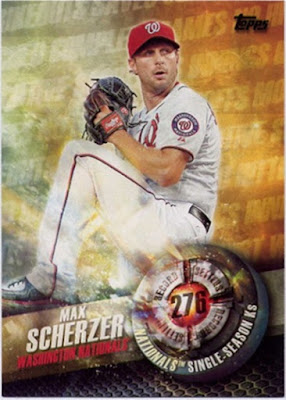 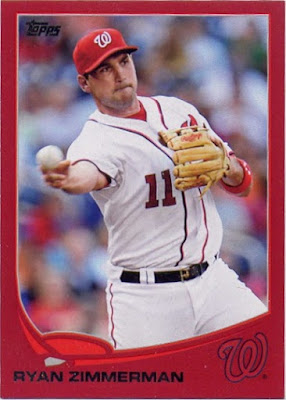 Note: This post sat for way too long in my post draft queue it is almost irrelevant now.
Posted by CaptKirk42 at 12:00 PM No comments:

In much the same way Snoopy imagines himself to be the World Famous World War I Flying Ace, I have been the World Famous Postseason Playoffs Professional Procrastinator when it comes time to post about the Nats Post-Season events and this post.  Sadly no cards will be shown in this post. I need to just get this post out there. This was the fourth time the Nats made the Post Season in six years and this is only my second end of the series results post things. Last year I made a quite detailed post with a game-by-game analysis.

So the players aka Teams in this drama, were the 97-67 Nats, their second best season record and the 92-70 Cubs (who just happen to be the defending World Series Champs) . Once again the Nationals had home field advantage which usually doesn't matter all that much or at all. 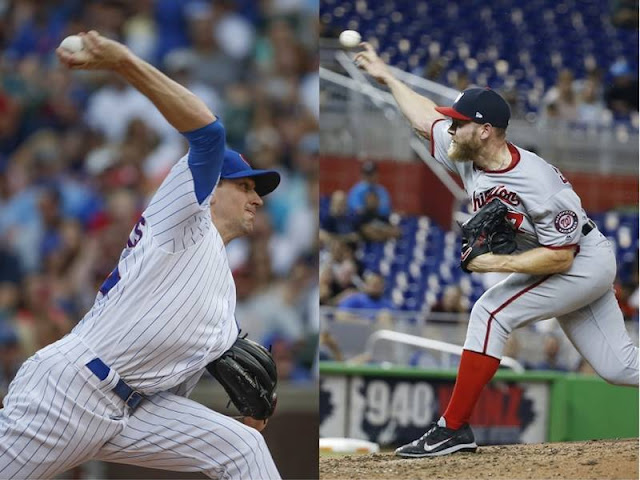 Game 1: Friday 06 October Nationals Park, Washington, DC - Loss 0-3
Sleep overwhelmed me so I didn't actually see any of this tragic game. Apparently the first five innings were just a pitching duel between Kyle Hendricks and Stephen Strasburg no biggie. Top of the 6th the damage began. Kris Bryant singled to bring in Javier Baez to break the scorelessness 1-0. Next batter Anthony Rizzo singles Bryant home making the score 2-0 Cubs favor. Top of the 8th Rizzo doubles to bring in Jon Jay beating the Nats 3-0.

Game 2: Saturday 07 October Nationals Park, Washington, DC - Win 6-3
It is at this point in the draft for this post that it has been so long since this series has played I don't recall how much of the remaining games I actually watched. So I must rely on what the Internet has to say about the details of the games. Good things started happening for the Nats right from the bottom of the first. Anthony Rendon knocks a solo homer in 1-0 Nats. Top of the second, not so good for the Nats right off the bat literally, the Cubs answer back with a homer from first batter Willson Contreras to make things 1-1. Top of the 4th things get a bit worse for the homie Nats. The Cubs Anthony, Anthony Rizzo knocks a two run homer making it 3-1 in favor of the Cubs. After loading the bases at the bottom of the 5th and not doing diddly a few innings later in the bottom of the 8th good things for the Nats started happening again. Adam Lind leads off with a pinch-hit single then Bryce Harper homers bringing Lind in and tying things up 3-3. Then Anthony Rendon is walked, Daniel Murphy singles and Ryan Zimmerman knocks in a 3 run Homer putting the Nats on top 6-3. Closer Sean Doolittle then shuts the door on the Cubs. Nats win 6-3. Series tied 1-1. 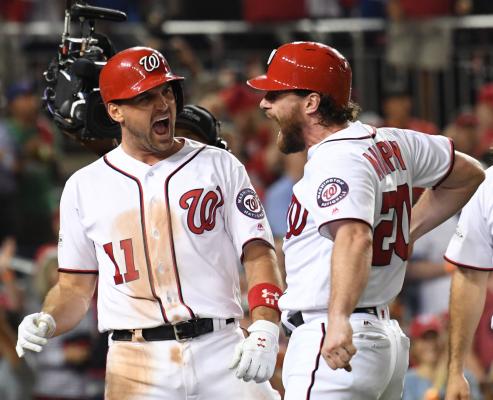 Game 3: Monday 09 October Wrigley Field, Chicago, IL - Loss 1-2
The series moves to Chicago where our Ace Max Scherzer and the Cubs Jose Qunitana duel for 5 innings. The Nats strike first in the top of the 6th when Daniel Murphy turns a dropped fly ball to left that then gets kicked into a triple. Ryan Zimmerman doubles Murphy home putting the Nats up 1-0. Then it unraveled in the bottom of the 7th Scherzer allows the Cubs first hit a double to Ben Zorbrist. Scherzer is replaced by Sammy Solis who gives up a single RBI to Albert Almara tying the game 1-1. Moving to the bottom of the 8th Tommy La Stella gets a lead-off walk is then sac bunted to 2nd. Then The Wrong Anthony, Anthony Rizzo hits a bloop single to left center scoring pinch-runner Leonys Martin putting the Cubs ahead 2-1 for the win and 2-1 lead in the series. 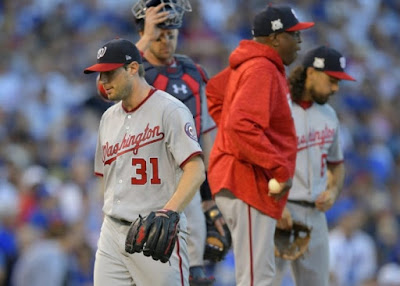 Game 4: Tuesday 10 October Wrigley Field, Chicago, IL - Postponed
Wednesday 11 October Wrigley Field, Chicago, IL - Win 5-0
Things turned around for this game after being rained out the night before. Originally Tanner Roark was going to be the Nats pitcher, but a few hours before the game started they announced it would be Stephen Strasburg starting on the mound for Washington. The game was windy and a little rainy but the game went on and the scoring started at the top of the 3rd. With 2 on and 2 outs Ryan Zimmerman hits a grounder to the shortstop who has trouble with the ball allowing Trea Turner to score and Ryan to reach 1st safely. Nats up 1-0. Moving on to the top of the 8th. Daniel Murphy singles to right center, Anthony the good Anthony Rendon draws a walk. Matt Wieters walks to load the bases. Next batter Michael Taylor hits a ball that barely escapes out of right field for a Grand Slam the Nats increase their shut-out lead 5-0 and win with it. The series is now tied 2-2 and it moves back to DC. Can the Nats win and move on to the NLCS or will it be another "one and done" year? 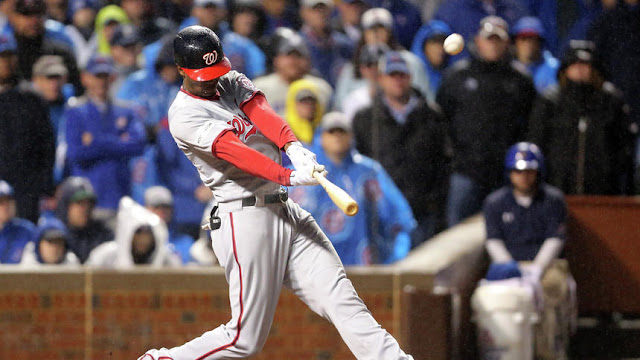 Game 5: Thursday 12 October Nationals Park, Washington, DC - Loss 8-9
The final game of the series, both teams face elimination or advancement to the NCLS to face LA. The starting pitchers are Kyle Hendricks for Da Cubbies and Gio Gonzalez for the Nats. The Cubs started things off in the top of the first whenThe Evil Anthony (Anthony Rizzo) scored Jon Jay with an RBI groundout. Seriously? First he scores in one game with a bloop single now he's scoring someone with a sac grounder? OK cubs lead 1-0. Now we go bottom of the 2nd. Good guy Daniel Murphy launches a first pitch homer to tie it up 1-1. Michael A. "Tator" Taylor smacks a 3 run homer to the left bringing in Anthony "The Good Anthony" Rendon and Matt Wieters home. This puts the Nats up top 4-1. Top of the 3rd we go Cubs load the bases and with one out Addison Russell grounds out to shortstop but Kris Bryant scores Nats lead now only 4-2. On next batter Jason Heyward, Gio throws a wild pitch that scores Wilson Contreras bringing the Cubs within one making it just 4-3. Top of the 5th Cubs do some damage. Addison Russell doubles to left Wilson Contreras and Ben Zobrist score putting Cubs on top 5-4. Jason Heyward is intentionally walked. Next batter Javier Baez strikes out but Wieters allows past ball get away, Wieters throws to first but the ball gets past Ryan Zimmerman AND Daniel Murphy allowing Addison Russell to score. Cubs up 6-4. Pinch hitter Tommy La Stella reaches base on catchers error loads the bases. Jon Jay gets hit by pitch forcing in a run score is now 7-4. Top of 6th Addison Russel doubles to left (again) and Ben Zobrist scores 8=4 Cubs. Bottom of 6th with 2 outs Jayson Werth walks, Bryce Harper doubles. Ryan Zimmerman at bat with full count a wild pitch sends Werth home and puts Ryan on base. Score now 8-5 in favor of Cubs. Next batter Daniel Murphy doubles bringing Harper home 8-6. Top of 7th Kris Bryant ground out sacs scoring Kyle Schwarber 9-6. Bottom of 7th Harper sac flies to center scoring Michael Taylor score now 9-7. Bottom 8th Michael Taylor singles to center scoring Daniel Murphy 9-8 and that would be the final score. 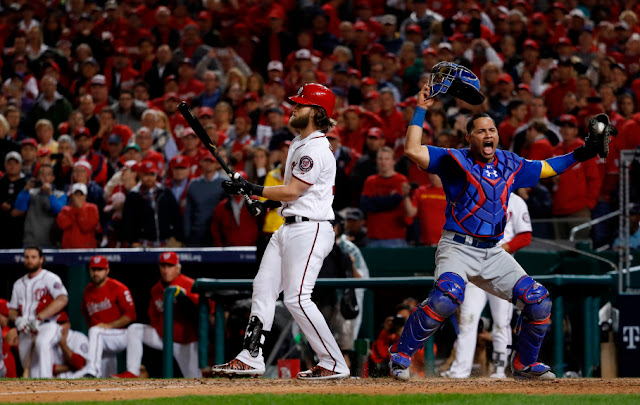 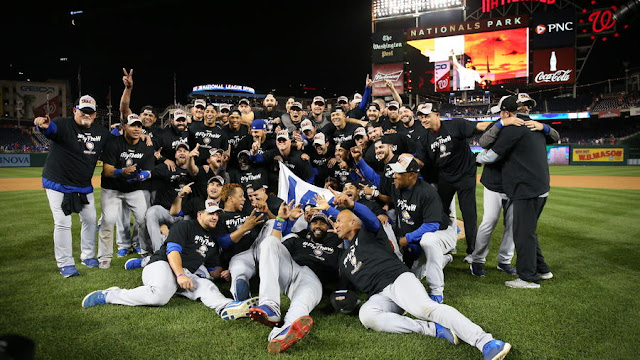 The Cubs moved on to the NLCS to once again battle the Dodgers who had eliminated the Diamondbacks in their NLDS (West). The winner will meet either the Astros or Yankees in the World Series. Last year's AL Champs the Cleveland Indians were eliminated by the Yankees this year's ALDS in 5 games. So the Cubs lost to the Dodgers. The Astros beat the Yankees and went on to win the World Series against the Dodgers in 7 grueling games.

The image at the top of this post is from the Series Preview at bleachernation.com