The card is from a very confusing set, many of the sets are now confusing with all the damn parallels, short prints and weird inserts the card companies love to produce now-days in the overproduced underproduction era. This is the 2018 Topps Gold Label Baseball: Class 2: "base" card for Victor Robles RC number 97. The Class 1 cards are considered "base" while Class 2 and Class 3 are considered "parallels" but each level has a base, black, red, blue and gold card thus adding to the confusion. I got the card from a Sportlots auction for the opening bid of 25¢ plus $3.25 shipping 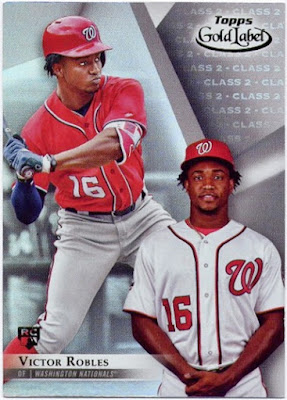 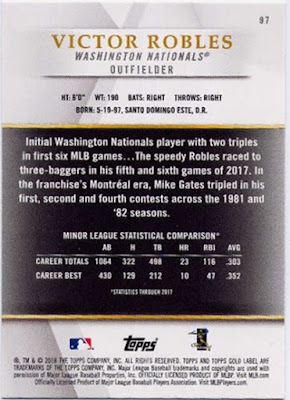 Confusing is right when I first saw the card I thought it was a gold parallel. It has gold foil on the lettering and at some light angles everything does look gold. I knew from ordering it the card was a Class 2, but being unfamiliar with the set design and the seller calling it a "scarce" rookie card I thought it was a bit more special than it really is. I also thought at first it might be a "black" parallel since part of the design that at first appeared gold to me, looks to be more of a gray. Upon searching the Internet for some black parallels (TCDB doesn't even have a checklist for the Black parallels yet)  they are obviously black not gray or brown. Both the base and the black are not serial numbered the other parallels are serial numbered for Class 2 the reds are #/50, Blue #/99 and of course the dang gold ones are #d 1/1.

Oh I had thought of adding another Robles card or two to this post, but then it wouldn't be a Senators Singles Post now would it?
Posted by CaptKirk42 at 12:00 PM No comments: