Expos Extra Episode 3: A Die-Cut Rock and an Unexpected Buyback

EXPOS EXTRA EPISODE 3:
A DIE-CUT ROCK AND AN UNEXPECTED BUYBACK

Been a while since I've done a dedicated Expos Extra post. I really should have been doing several per month since this is the 50th Anniversary of the franchise. It looks like at one time I was trying to keep the Expos posts as a special series so I will try to continue with the theme and try to catch up with the appropriate numbering of episodes.

Here's a story of a lovely lady couple of cards that came in a package of Expos cards that I had purchased from a fellow collector. Actually I'm not sure exactly which package of Expos cards it came from whether it was from a blogger or a collector from one of the forums, or from a blog reader. They were in a package I had gotten sometime late last year (2018). As I said I'm not sure exactly which one. I just recall that when I was doing my mail-day catch up posts at the end of last year or beginning of this year (OH Jeez I need to do one for this Year mid Jan through now UGH) I later noticed these two cards by themselves out of an envelope or box.

Normally I'm not too fond of the type of cards these are; a die-cut, and a stamped Topps Buyback. I make a big exception with these since they are Expos, although not players who ever played in DC, they retired before the move from Canada to Washington DC. When I first started this blog I wouldn't have mentioned them here. One of them is a Hall of Famer and PC player even if he never had been a part of the Expos/Nationals Franchise.

The Players Tim "Rock" Raines and Andres Galarraga both cards are of the 1989 Topps design, the Raines is a 2014 Topps mini '89 and the Galarraga is an original '89 but STAMPED "buyback".

In 2014 Topps inserted special mini 1989 design cards to celebrate the 25th Anniversary of those cards. I'm not to thrilled about minis anymore and even worse they decided to make the minis die-cut cards. The cuts follow the border of the design so they aren't too bad, but I am just tired of these specialty cards. So here is Tim Raines 2014 mini die-cut using the 1989 design card number TM-5 (TM=Topps Mini) 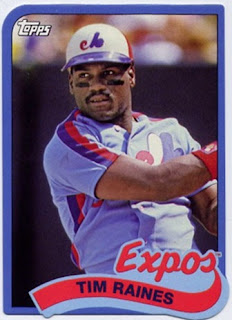 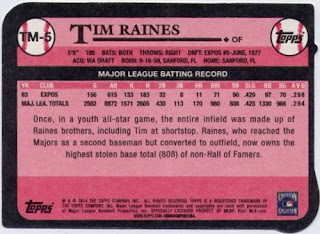 Another specialty aka gimmick that Topps has been doing lately is stamped buyback cards. These are real vintage cards that made their way back to the Topps factory and years later Topps decides to include them as inserts for newer sets but they make a special value/condition damaging stamp to let you know your buyback "vintage" card is now worthless. Except to collectors who are chasing all buybacks. Some buybacks are given special logo stamps this one is one of those trickier "Rediscover Topps" buyback stamp. 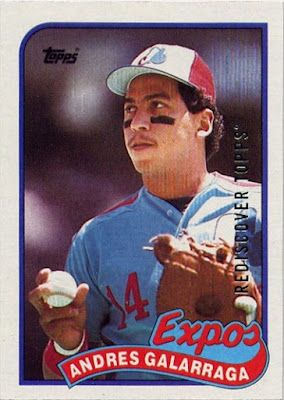 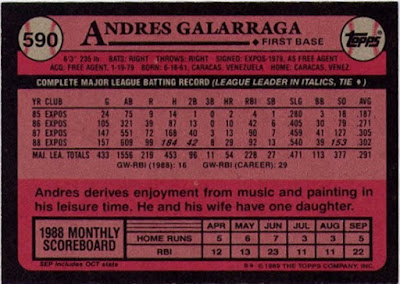 OK so I had to make the Raines mini image medium sized to sort of keep the size difference perspective. After making this post I am a little softer on die-cuts like this one that make sense and aren't too outrageous. I am also a little kinder to buybacks as well. However I'm still not 100% sold on either "gimmick"
Posted by CaptKirk42 at 12:00 PM 1 comment: