1970 Wall Decorations
During the 1960s and 1970s Topps seemed to love oddball inserts much like they love to overdo today. One of those inserts for 1970 was a 24 set of "mini" posters that measure 8-11/16" x 9-5/8" and were inserted in the regular wax packs. Since they are just thin newsprint thickness paper and folded to fit the packs they tend to tear at the folds. So far I am fortunate in the two I have with little or no rips, my standard two Washington Franks, Howard and Robinson which are featured in this post. Mr. Robinson of course represents the Orioles. It seems the only other Senators past, present or future in this 24 "poster" set were Denny McLain (Tigers), and Don Mincher (Pilots).

I seem to recall as a kid my brother had a copy of the Frank Howard poster pinned to the bedroom wall of our childhood home. At the time we were sharing the bedroom that I would eventually be the sole occupant of when my brother decided to move to the basement . I have no idea where that copy of the poster went. Anyway here are images of the posters for the two Flagship Franks of this post series. 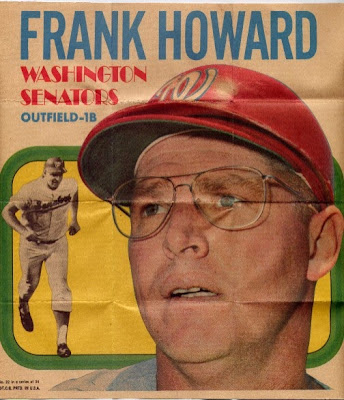 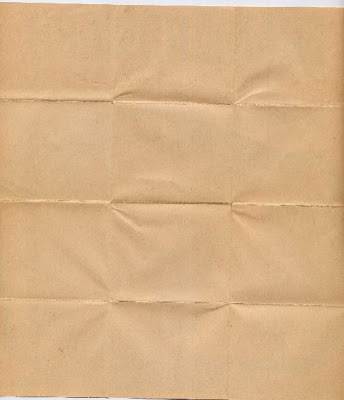 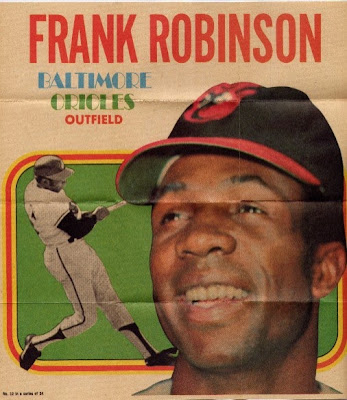 These mini posters are just a  fraction too large for my scanner to capture the complete width of them. This image of the Frank Robinson poster I moved over slightly so that the copyright line can be seen on the right side, the Frank Howard poster has that info under the "card" number on the lower left side. 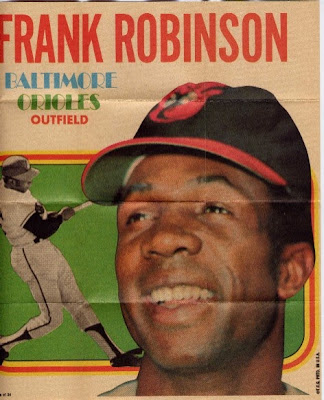 Other SeNators mentioned in this post:
Denny McLain
Don Mincher
Posted by CaptKirk42 at 12:00 PM No comments:

FRANKly Friday: Great Limited Autographs
OK so this week I'm only showing one Frank, but its my fave Frank Howard. This card I got from Ebay for cheap, well not so cheap it was lets see (looks up quickly on semi-recent card forum blog posts...) $10.19 +  $1.99 Shipping. 2011 Limited Greats Limited Autographs 29 Frank Howard Senators auto blue sharpie on sticker #d 007/299. When I got it I was a little disappointed because in the Buy It Now Auction listing it looked a lot BLUER than it really is. I guess the camera or scanner the seller used was set really bright, and reflected the light just right, probably was a camera. Anyway in addition to the fact that it was Frank Howard, and that it was an Auto, and that it was Leaf Limited (well Panini Limited) and that it was serial numbered, it was serial numbered to Kill 007 James Bond's number. If it was just plain old 7 I'm not sure I would have pulled the trigger on it as quickly as I did. I wish that Topps didn't have the official Monopoly licensing for baseball products. No team logos and just the name of the city is a huge reminder of that fact. Anyway here is the card enjoy. 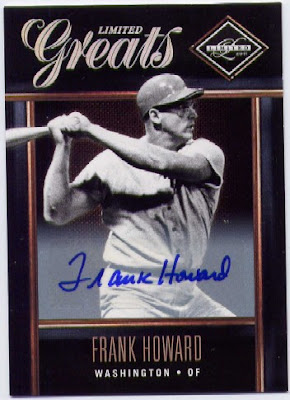 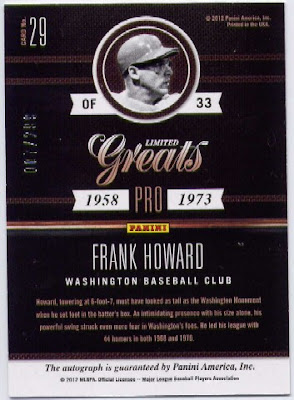 I just noticed while looking at the scans that the "OF 33" on the back could almost be misinterpreted as coming from a small set of only 33 cards. Instead of standing for Frank's position and jersey number.

1953 TOPPS Reprints
Last week I showed the 1952 Topps Reprint I have this week I will show the 1953 Topps Reprints I have. I also have some original 1953 Topps cards (a couple of St. Louis Browns) but none of them are Senators yet. I like the design of the 1953s more than the 1952. Again I got a Senators Team Reprint set (Didn't get one of the Browns although I should so I can do a side by side with those originals I have on my regular card blog). 1953 had the same two Franks (Campos and Shea) as the 1952 had this time both were shown properly/timely as Senators. This time the reprints were done in 1991 under the "Archives" Brand. 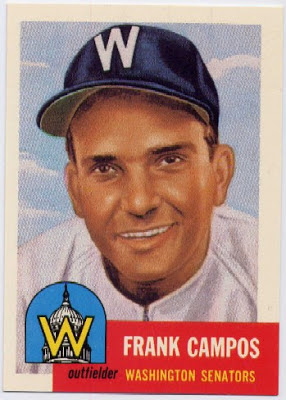 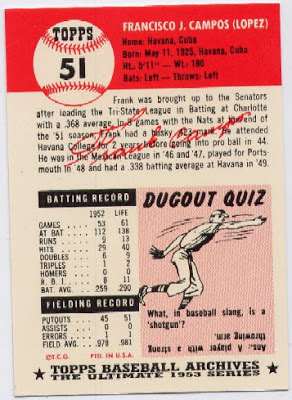 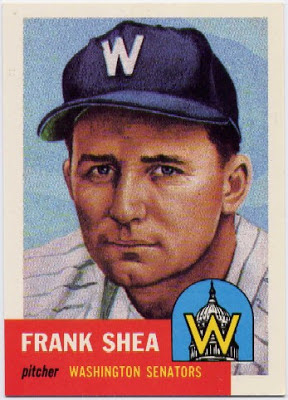 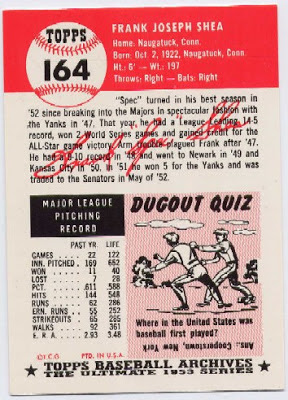