Get Back On Your Bikes

OK so this is another quick and dirty last night of the month post. The card I'm featuring came just in the nick of time. I got it from Ebay I had been watching it for a while and pulled the trigger on it. I got it for $5.99 Free Shipping. I think I had been watching one copy of it that sold out from under me. A few of these Topps Now Cards have done that to me. So in a way this card is sort of part two. Due to the achievement that was accomplished. So many moons ago I had posted about when Trea Turner hit for the cycle for the first time in his young career (Something Bryce Harper has yet to do, he came close a few times here in DC but didn't do it here, maybe sometime in Philly.) Back then I made the post "Get On Your Bikes And Ride" Which is a tribute to the rock group Queen in a way. Even though I showed a couple of cards highlighting that first cycle at the time I didn't have the card. I have since gotten that card.

In the meantime once again in his Career Trea Turner hit for the cycle. His second time but he also tied a record of sorts. He hit his second cycle against the same team he had hit for his first cycle 2 years previously. The Colorado Rockies. Trea is just the 3rd MLB player to do that. Very cool.

So here is the card commemorating that which I got this afternoon (Monday 30 Mar 2020). 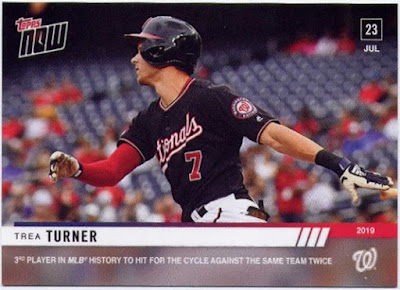 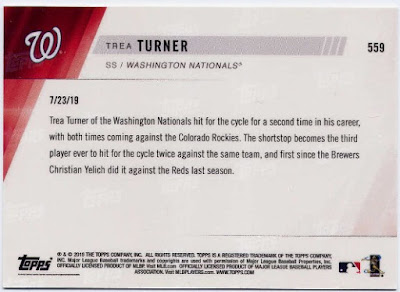