1952 TOPPS Reprints
Many baseball card collectors consider the 1952 Topps Baseball set to be the Crème de la crème set of baseball cards. Nobody seems to know exactly what it is that has made this one of the most sought after sets in the hobby. This popularity and its scarcity makes the prices for the individual cards insane. So I will probably never have a complete original set, and probably won't even have a complete Original Senators Team set from 1952, but I did manage to get a reprint set of the Senators (and a reprint set of the St. Louis Browns who would become the Orioles in 1954). I have one original 1952 Topps cards of a Red Sox player. I don't have any original 1952 Senators yet. The Senators had two Franks playing for them in 1952; Frank Campos and Frank Shea. Both had 1952 Topps cards, however Frank Shea's card has him as a Yankee as he was traded to Washington in May of 52 and apparently Topps had already printed their cards, where as Bowman seems to have him as a Senator. So right now I only have the Campos '52 reprint so that is the only one I can show right now. When I get some of the originals I can do a side by side, until then I will only have reprints to show from time to time. The 1952 set was reprinted in 1983. 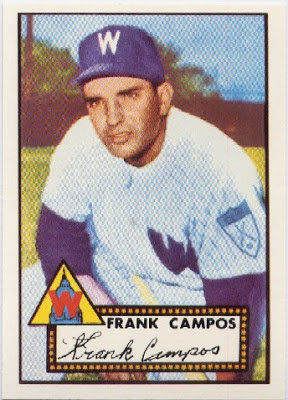 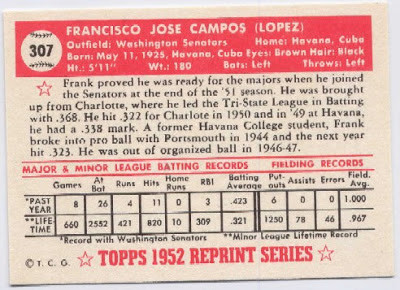 BRIAN SCHNEIDER - (39) 23
Expos to Nationals transition catcher
Expos 2000 - 2004 / Nationals 2005 - 2007
I'm trying to get this semi-regular player scheme going again. The biggest problem I've had with it is deciding which 5 (or 6 maybe) cards of an individual SeNator to feature, make sure I have the backs scanned (I didn't use to scan card backs for the longest time) and to hunt for photos to decide which if any to show along with the cards, and then to plan who will be featured next. The basic criteria for me to feature a player is for me to hopefully have more than just one or two of a player's cards; the player must have been on one of the DC Club incarnations so guys like Gary Carter and Vladimir Guerrero will not be mentioned in this series. I may blog about them from time to time since they were Expos, but neither actually played in DC on the home team. The closest Vlad got was playing in Baltimore for the Orioles.


OK so onto this post's Curly W Player Brian "Schneider-man" Schneider. Brian was the Expos main catcher when the team moved over to DC to become The Nationals. He caught the inaugural first pitch President Bush tossed in 2005. At the time he was my fave currently playing catcher. During his tenure as a National, Brian was an Amazing catcher (at least to me) and had a pretty decent arm for catching base stealers. He was one of the "take the lead" team mentors for younger players and worked well with the pitchers as their "quarterback".

During the off season in the winter of 2007 News of him being traded to the New York Mets along with Outfielder Ryan Church (another fave Nat) for Lastings Milledge really ticked me. Probably because it was the first trade I recall that involved some of my faves that I heard about when it happened. I blogged my Gut Reaction to it on my regular blog in a post titled Nats + Mets Trade = UH OH. At the time I didn't have a card blog yet so all my card posts and sports-news posts were made there. It took me a couple of years to get over the trade, by that time Lastings Milledge was traded to the Pirates and Brian was still with the Mets about to move to the Phillies. Brian's last playing season was 2012 with the Phillies he announced his retirement on 29 January 2013 a day after, fellow Expo to National, Nick Johnson (last with the Orioles) announced his retirement.


Lookie what I found. "Final?" Play at the Plate between Ex-Teammates.
Baseball Historian fans may recall that Brian was the Catcher at the plate in the 2007 "Chasing the Record" Circus game vs. The Giants in San Fran. where Barry Bonds hit homer number 756 off of Mike Bacsik -  freezing the game for an hour or two.
OK it was only about 35-45 minutes but it seemed about an hour too long. Yes I know it was baseball history and it was a big thing at the time, but halting the game for more than 10 minutes was uncalled for. 15 minutes tops would be acceptable for anything of this nature.

Now lets get on with the Card Show: 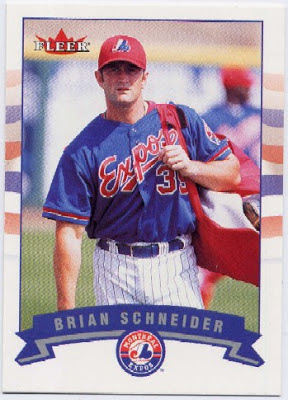 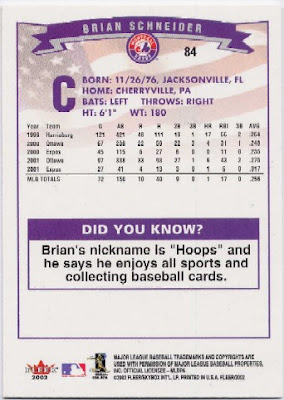 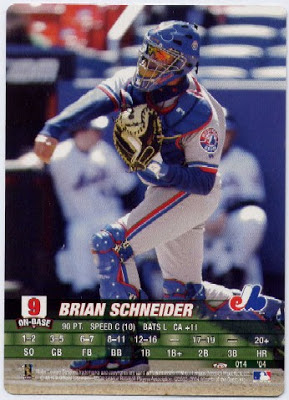 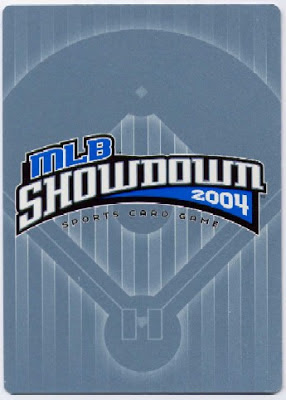 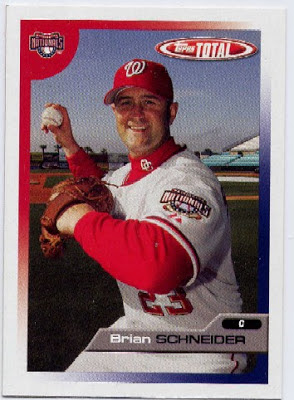 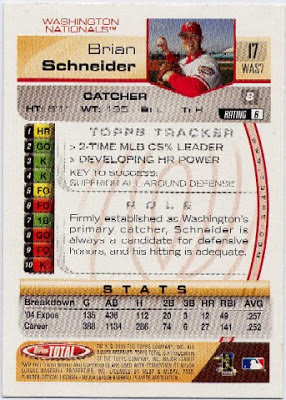 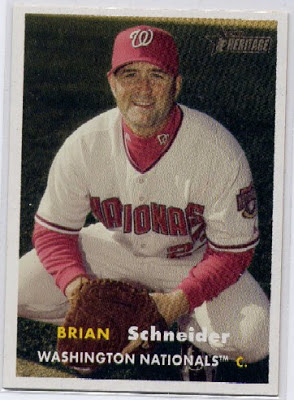 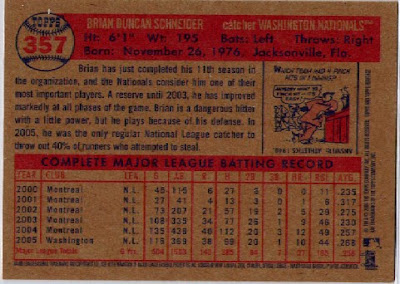 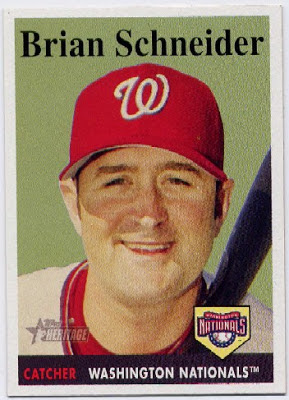 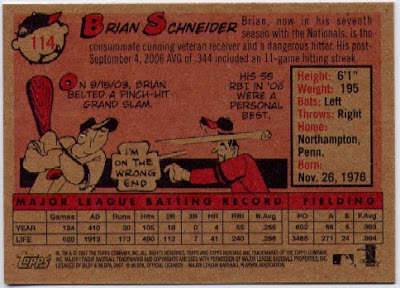 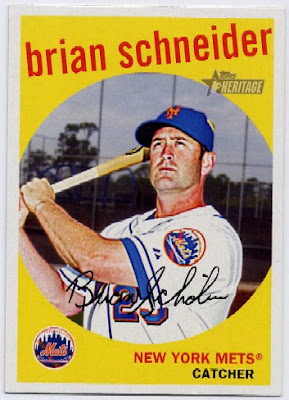 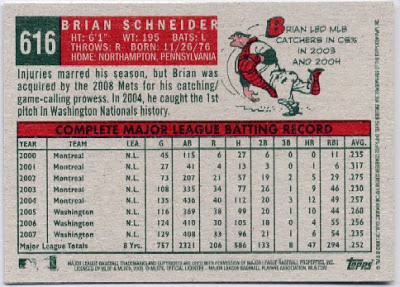 Oddly Brian sort of bears a slight resemblance to this 1960s Senators Catcher. I noticed the resemblance when I first got this card from sportlots (I think). 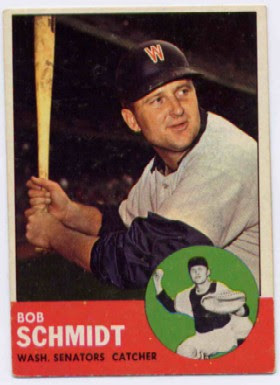 Starting in 1970 until 1983 kids who went Bonkers for Baseball cards could get some real cool cards out of a box of their favorite Kellogg's brand breakfast cereal. OK maybe not all the Kellogg's cereals had the cards but several of them did, or had some kind of promo/giveaway for kids to send for a free card. I think for $xx.xx and some boxtops/proof of purchase you could get a full set. They did this for football also probably the same years I didn't check the FB years.

The cards are an early 3-D effect produced by a company or process known as Xograph which is what some people mistakenly call these cards since Kellogg's is not mentioned anywhere on the cards, but they were the distribution source. The cards have a tendency to bend or bow like 1990s Chrome and Bowman cards. One down side to this type of card is instead of getting creases when they are bent or folded the front plastic cracks and frosts up ruining the 3-D effect and often destroying the image as well.

Anyway on to the Washington Franks that appear on cards in this set, Of course our former Inaugural Nationals Skipper Frank Robinson wasn't a Washington Frank yet he was a B'more Frank.

So without saying too much "I had a bunch of these cards back then and ate tons of Sugar Pops to get to them" (I probably did but it was probably Cap't Crunch or Quisp) I'll just jump to showing the two Frankly cards this week. 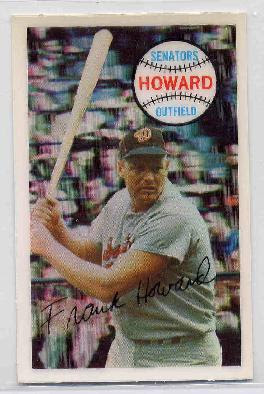 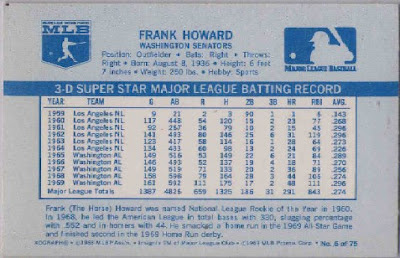 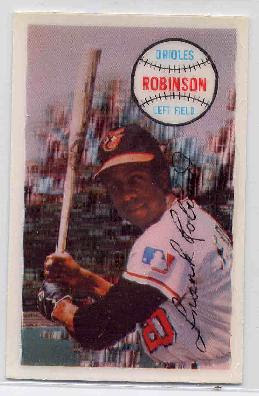 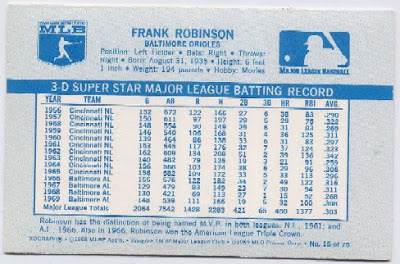 There are 75 cards in this set and I have 15 of them. Most of mine are in decent shape with little or no cracking but there are a few that are in bad shape. 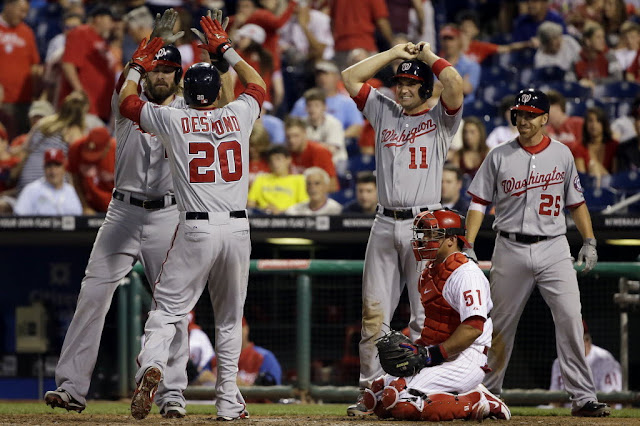 19 June 2013 Citizens Bank Park - Philadelphia, Pennsylvania
In a season loaded with unfulfilled great expectations and riding a sub .500 to sometimes barely over .500 season wave Nationals fans finally had something big to cheer about. The Nationals avoided getting swept by the Phillies in game three of an already lost three game series thanks to shortstop Ian Desmond in extra innings. They also snapped a three game losing streak. 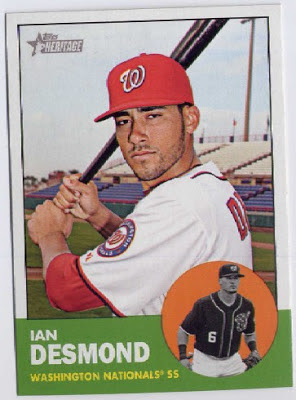 For most of the game the Nats were behind 2-0 after the Phillies took the lead off of a two run homer in the first inning. Then hope began to rise in the top of the seventh when Jayson Werth singled to bring home Ryan Zimmerman, cutting the Phillies lead in half. In the ninth just when all hope looked lost with two outs and two men on, Jayson did it again scoring Denard Span to tie up the game 2-2. As the Phillies got out number three their fans were enthusiastically grinning from ear to ear anticipating a win and a series sweep, but RHP Drew Storen held them and the game went into extra innings.

After a scoreless 10th inning things heated up in the 11th. After one out Ryan Zimmerman got on the bags with a double. The Phillies intentionally walked Adam LaRoche to get to their ex-teammate Jayson Werth (the man who batted in the Nats only runs in the game thus far). Jayson drew a walk to load up the bases. Next to bat Ian Desmond, who was 0-4 with a ground out and three strike-outs and looking about to whiff a fourth strike-out. Ian got to an even count of 2-2 on a ball 2 that all of Philadelphia thought for sure was a strike, then his bat struck gold sending the ball out left-center field putting the Nats ahead 6-2 and giving Ian the first Grand Slam of his Career. The next batter Steve Lombardozzi got a single and stole 2nd base but the next two batters flied out and struck out. The Nats then held off the Phillies to win 6-2.

I was only surprised that it was his first career Grand Slam I tend to forget how many actual runs were produced by each home run a player gets. The Nats leap-frog over the Phillies with this win to get back into 2nd place in the division 7 games behind the Braves.

Frankly Friday: Playing Around In 1968

TOPPS PLAYING AROUND IN 1968

In 1968 Topps included as an insert a 33 card set of mini-sized cards with rounded corners that resemble standard playing cards more than baseball trading cards. These game cards had a standard back that is reminiscent of the 1951 Topps Red Backs and Blue Backs : 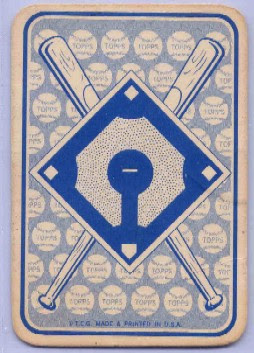 The fronts had a headshot image of an All-Star or big named current player with a facsimile signature and a play result such as "Home Run" "Pop Out" on the top and bottom. The bottom play result was upside down so you could read the card from either orientation. Also on the bottom is the card number that says "No. X in a series of 33". The cards were included in the regular 1968 Topps Baseball cards issue and apparently were also available as a full set (If purchased through Topps I guess).

Not sure if they ever had some sort of rules card or guide book to tell kids how to play the dang game. Place shuffled deck of cards face down and draw top card follow play instructions. I guess you would draw cards until you got 3 outs then the next player would draw cards. After going through the deck reshuffle and play again? In 1971 Topps came up with a Football game that was similar that was played in conjunction with some mini posters that had a football gridiron field on the back with rules. On my regular card blog CaptKirk42s Trading Cards Blog I have mentioned both and have a want list for each. For the baseball game I only need 10 more cards. I have duplicates of some of the cards from both sets.

Anyway Both Frank Howard and Frank Robinson were included in the set. 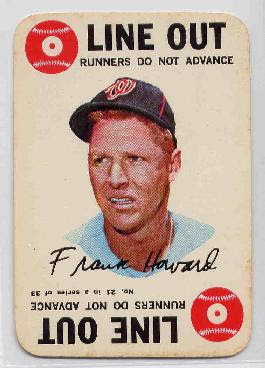 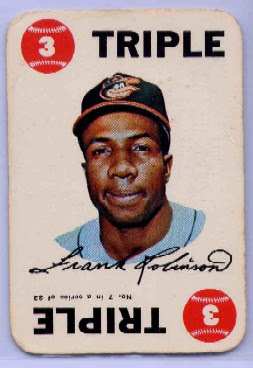 Senators mentioned in this post:
Frank Howard
Frank Robinson
Posted by CaptKirk42 at 12:00 PM No comments:

FRANK ROBINSON:
Managing in the minors

Here is Frank in his Red Wings Uni. The card back interestingly gives his right handed batting and throwing, plus mentions the Cleveland Indians the last team he played on and first he managed, and mentions his coaching for the California Angels. Ah they are probably hinting at his player-manager role while with Cleveland, that must be why the player info. Frank doesn't look to happy here. 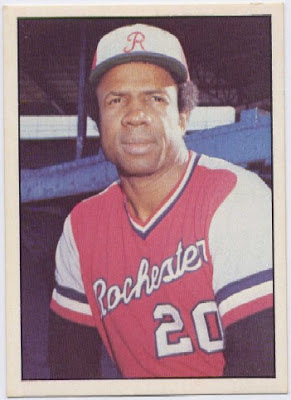 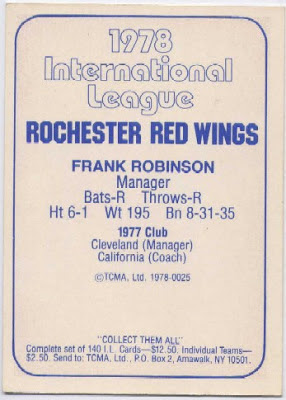