Hey lookie who is on the cover of the current MLB Insiders Club Magazine! 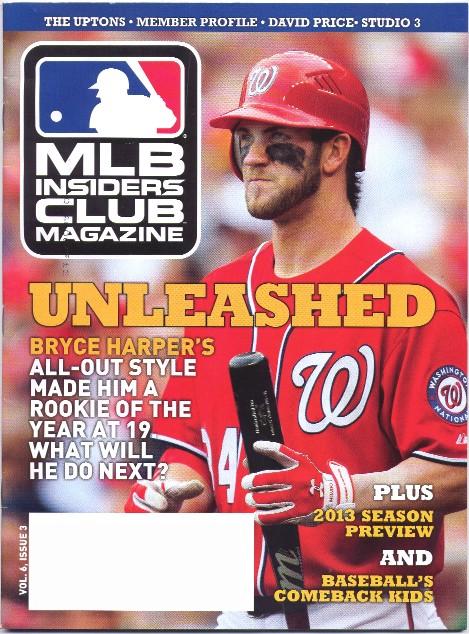 I haven't read the article yet, but I will when I get the chance. In the past the Nats didn't get too much national press, but since last year's breakout season they will start getting some. The large white area on the cover image is the address label which in reality has all my subscription info and address, but I cutout, deleted, whited-out, wiped out intentionally to keep scammers and identity thieves away.

Speaking of Bryce I recently purchased a couple of sketch cards from Ebay. The artist/seller only does 1/1 cards he doesn't make multiples of his work. It looks like he uses mostly color in several mediums. I will give more details of the cards when I receive them and have gotten a chance to scan them. They are pretty cool they aren't real great, but they are very well done.

Nationals mentioned in this post:
Bryce Harper
Posted by CaptKirk42 at 12:00 PM No comments:

A Pay It Forward Card

On Monday 22 April, 2013 I received a single card from Troy a member of the online card forum Trading Card Zone (TCZ) as part of a "Pay It Forward" honor system. Basically there is a post there were you post what you collect and other members check out the lists and check their piles of trade-bait then get your mailing address either directly or by surprise tactics and send you some cards. Then you are honor-bound (by honor only) to send something to someone else who posted in the thread to gift and "Pay It Forward".

The card is very similar to a card I already have, at least as far as the design style and the back is concerned because it is a Topps Archives card that pays homage to earlier cards and card styles.

To keep you in a little bit of suspense let me show you the card that is being honored: 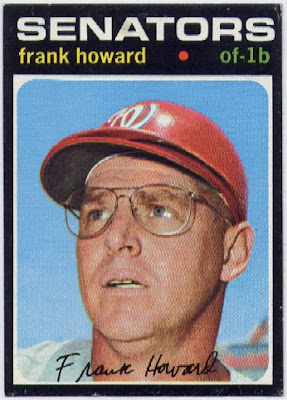 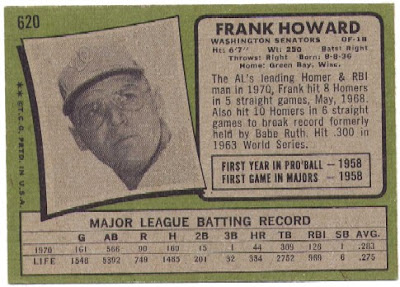 Now here is the back of the card I received: Notice it is very similar, of course they use modern glossy cardboard stock added all the modern copyright info and trademark symbols as per the legalities of the trading card business now-days. The card number of course is different since this is not a true "reprint", well since it is an Archives Fan Favorite it is more of a facsimile of a reprint. 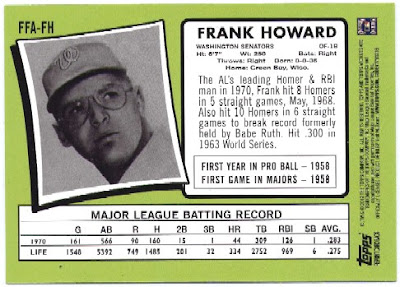 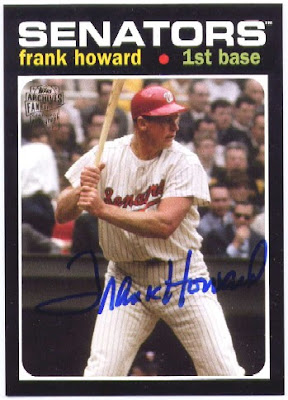 For the front of the card (as par for the course) they used a different photo. Added the modern "TM" trademark logo and for Frank's position they used "1st base" instead of sticking with the 1971 abbreviation of "1b" and they dropped the "of" (outfield) although they used it on the back since the back seems to be a fairly faithful reproduction although slightly smaller due to the side copyright lines. The green text is a bit brighter.

Frank's signature is plainly basic he often will add "1960 N.L. R.O.Y." or "1968 1970 A.L. HR 'King' " to his signature sometimes his #33. I guess it depends on how much time he has to sign stuff. For these card company signing sessions he (or Topps) probably wanted to keep things simple since he had to sign who knows how many of the dang things.

Senators mentioned in this Post:
Frank Howard
Posted by CaptKirk42 at 12:00 PM No comments: