I wasn't sure if I had already blogged about this or not. I thought I had but apparently I have not. I also thought I was confusing it with another Pocket Schedule I have somewhere for I think for the Syracuse Chiefs (now the Mets) that has Bryce Harper on the cover. That one I think I have two copies of. This one for the 2012 Harrisburg Senators I thought had Bryce Harper on it. But the player on this one is wearing number 3 which during 2012 was Eury Perez at one time, however the player is not Eury it is Chris McConnell who wore number 3 for the Senators in the previous season 2011. 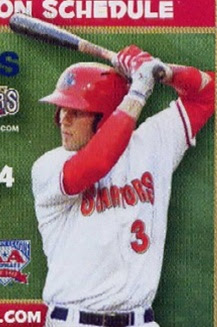 Actually that very well could be Bryce Harper (with his "4" hidden) he is batting lefty. One copy of this currently on Ebay is advertising it as Bryce. OK yeah it's Bryce Harper. So I might only have one of these schedules.

Anyway here is the 2012 pocket schedule for The Harrisburg Senators. 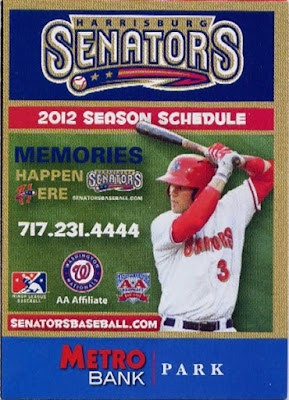